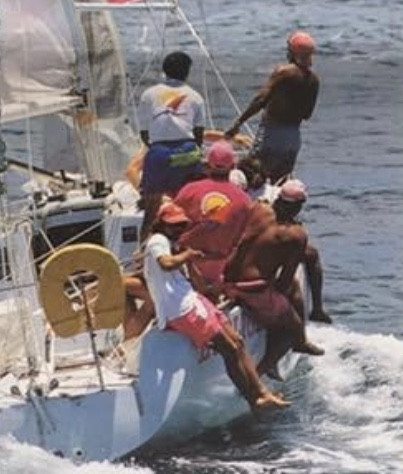 As I was writing the last blog about my time sailing on the Soverel 30. I realized that this particular boat was a really big part of my sailing life. I actually sailed on that same boat at different times and with different owners over the years. No matter how many other boats I raced on, I always seemed to run into hull #64 over and over again. Coincidence? Here are some more adventures with her.

The first owner of hull #64 was Dougie Myers. He bought her in Florida, brand new out of the factory, and sailed her to Trinidad. He named her Hooligan. Still, not sure if it was for her behavior under spinnaker. Or for the crew behavior under liquor. I joined the crew soon after her arrival in Trinidad and delivered and raced her in her first offshore regatta.

Every day sailing on that boat was a learning experience. We had all come from heavy displacement boats and were now learning to race all over again. This boat was state of the art for the day in the early 1980s. We had a time learning and to this day have never had worse broaches than with Hooligan. Learned lots of new techniques. Even had the designer Mark Soverel sail with us a couple times to help flatten the learning curve.

One race that sticks out for me was a Girl Pat Trophy race. This is one of the oldest, if not the oldest race in the Caribbean, and is from Trinidad to Grenada. It’s an overnight race that’s about 90 miles from start line to finish line. We started at about 1630 on Holy Thursday afternoon in front of the Sailing Association. Short beat out to the Five Islands which acted as a turning mark. Then spinnaker up, downwind to the Bocas and out into the Caribbean Sea to Grenada. We exited the Bocas at about dusk and settled down to close reaching for the next 78 miles to Pt Salines in Grenada.

For every other boat that meant settling into the cockpit. And a kind of watch system to rest down below in turn for the night. Not for us. We had determined that in order for us to have any chance of winning, we would have to hike on the weather rail all night.

Now remember, no life jackets being worn (they were down below only in case of emergency). No safety harness, no sailing shoes (mostly barefoot) and made up foul weather gear (some of us were wearing black garbage bags to try to keep dry). Got settled down on the rail at about 1800 and remained hiking there until we got to Grenada and finished at about 0500 next morning.

Our “watch system” was, every hour, the helmsman and main sheet trimmer would switch jobs. For the hikers, that meant that the “bowman” would get to move all the way to the back, and the whole group would slide up one space. Very necessary and equal opportunity for getting soaked. This is when I learned how much water and wind the most forward guy blocks! Also, this was the time when we could get liquid warmth in the form of a bottle of scotch. Every hour this was passed around for one sip throughout the night. Young and invincible. Don’t remember much… except that we won that race!!

I raced with this boat for about 3-4 years until she was sold around 1983. Hooligan was always a transition boat as Dougie had already got plans for a Soverel 42. This boat was being built locally and was launched in 1984. Those adventures will have to be for another time.

The next time I came across the Soverel 30 was in the early 1990s. She was now named El Conquistador and was sitting on the mooring at the club in a state of disrepair. Since being sold she had raced a little until there was a tragedy. One of her crew was hit by the boom and was killed during a race. The new owner sort of lost interest and so she just sat at the mooring for a few years, hardly ever sailing.

At that time, one of my good friends who was also racing on the Soverel 42, decided it was time to race his own boat. I remember the day he told me that he had just bought the boat. We were at the bar in the club. English then says “let’s go and check this boat out”. We get a lift out to the boat and go aboard. We are poking around down below. There is water in the boat above the floorboards. The engine is seized and some of the bulkheads are loose. The sails are the original sails from when I used to sail on the boat.

So, we go back on deck and are pumping our bilges off the side deck. I say, “This boat is in terrible shape” and English replies ” Be careful how you talk about my boat there!” With that, we must have both leaned on the life rails which immediately failed and dumped both of us into the sea! What a return! It’s as if the boat said ” Take that for abandoning me and getting me in this state!” We were laughing so hard we nearly drowned before we could climb back aboard.

Well the first order of business was to change the name back to what it was before. English did the right thing and got permission from Dougie to use the name again. We further appeased the spirits with copious amounts of rum and beers. And so started the return to form for the boat. And it was the beginning of our own crew. This crew that would go on to win just about every regatta in the Caribbean in many different boats. It all started with Hull #64 Soverel 30 Hooligan. More to come next time.

Early movements on Day 4. Had to tour the docks an

Day 3…had a quick walk around the docks to look

A wet Day 1 of the boat show is now history…