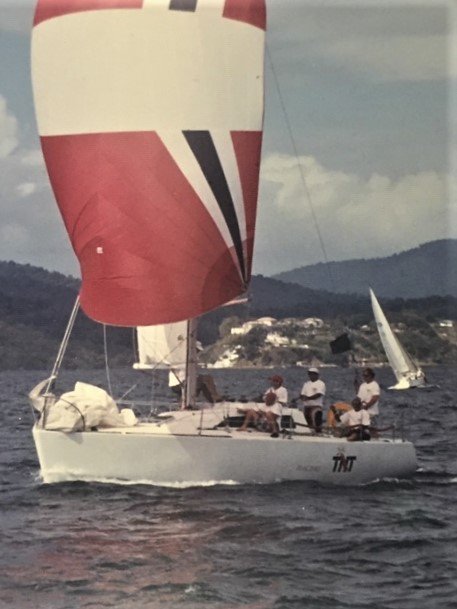 In the early 1980s I was introduced to the Soverel 30, a new breed of boat. Up to this point, the boats being raced were all heavy displacement boats. You could cruise and live on them as well as race them. Enter a light boat (for those times), with minimal interior where the focus was more on speed than comfort. Now the games were truly afoot.

When I started in sailboat racing in the 1970s the boats were very different from what they are now. In those days there were a lot of wooden boats still around. I remember a 6m and an 8m yachts racing in the club. As well as a Milne sloop and some other boats from other noteworthy designers of the day. There were also the more modern fiber glass boats like Cal 40, Swan 38, Hughes 38, Pearson 36 and boats of that ilk. Competition was fierce and they all had their chances at winning. These were all similar boats in displacement and sail area so all was well.

The racing scene in Trinidad was changed in around 1980/81 when a boat named Wings arrived. This was a Soverel 30 that was previously owned by the designer and builder Mark Soverel. This boat was fractional rigged and had the tallest mast compared to boat length that I’d ever seen. She was a proven race winner in the US and continued her winning ways in the Caribbean. Most of the boats racing at the time averaged around 14,000 lbs displacement. The Soverel 30 was 7,500lbs! Change had come to local racing.

After seeing what Wings had done, there were orders for 3 more Soverel 30s. This time they were all masthead rigged boats. I remember the owners flew up to Florida and sailed them down to Trinidad. Crew was needed for this influx of new boats and I was lucky enough to get on one of them.

What followed was a very steep learning curve. All the owners and crews were used to sailing heavy displacement boats. In fact, some helmsmen had to re learn how to steer from the windward side, and use a tiller extension! Us crew had to learn how to truly hike. Not the lounging on the weather rail as we had grown up with. Also, learned the hard way about not hanging out on the bow. All these years later I can still hear “Get Off the bow!!!” As well as catch myself saying it all the time. These boats were the precursors to today’s sportboats. The crews had to work really hard both upwind and downwind to get them around the course quickly. Under spinnaker, they were lively to say the least.

The first few seasons learning to race these boats were great fun. Having 4 of the same boats in the fleet sped up the learning process. And provided for some great sailing and competition. A lot of the crew were young guys 17-22 years old. Fearless and indestructible made for some great times delivering and racing these boats. Compared to the boats that we sailed on before, these boats were tiny and wet.

Looking back I just don’t have any bad memories. Everything was fun and laughter. They were tough little boats as some deliveries between the Caribbean islands were quite rough. As a young guy these were some best days ever. Learning to race “modern” boats and having great times with good friends. Great islands, regattas and bars!

As I’m writing this, the stories are flooding back into my mind. Can’t share a lot of them but I will share some adventures in one regatta that we did. It was a regatta in Petite St Vincent (PSV). Sadly this regatta is no more but back in the late 70s and early 80s it was the bomb! From the time we left the dock in Trinidad to deliver the boat… to when we returned after the regatta was one great adventure.

The overnight passage to Grenada was nice and uneventful. On arrival in Grenada we learned there was to be a big party at a hotel in Grand Anse that night. The owner decided that we couldn’t miss that and somehow got tickets for himself and us 3 crew. Don’t remember much but there was a bacchanal in the party involving the wife of the hotel manager, one of our crew and a bottle of rum. All I know was that we had to flee from a posse of police! Through the kitchen of the hotel, into a car and straight to the boat and cast off. About 0200. Owner alternating between cursing us and laughing for the rest of the trip.

On arrival at PSV, the engine wouldn’t start so we sailed up through the crowded anchorage and anchored. We were living on the boat, so we used to strip the boat for racing and pile everything on a little dock every morning. And put it back on in the afternoon after racing. All this done by dinghy with oars (didn’t have an outboard). Rowing a rubber dinghy upwind to the dock was a task! Next was to collaborate with someone who had a dinghy with an outboard. Did I mention that the next island over, Petite Martinique was part of another country? It was also a smuggler’s den known for cheap alcohol. One of our other jobs was to make the run for alcohol whenever we ran out. Dodging the one policeman on the island was sport.

The racing here was unbelievable! Racing around rocks and islands and between reefs, sometimes in big waves. Under spinnaker in big waves these boats are a handful. When it came to gybing the spinnaker, is when the adventures really started. I remember running in from Sail Rock in about 25 knots of wind and a big sea and we had to gybe. There was a reef that we weren’t going to clear.

We used to do end for end gybing with no lazy guys… So, the fore deck guys have just disconnected the pole. Boat starts rolling and we reverse broach! Boom comes over and we are knocked down flat with the mast in the water. The bow guys are washed overboard and I am underwater trying to deal with the new sheet. When I come up for a breath, I see the bowman in the sea holding on to the mast man’s ankles. The mast man is holding on to the shrouds just below the first spreader and trying to pull himself down them towards the boat. I dive back down and get to free the riding turn on the winch. The boat pops up and I see the fore deck guys landing on the side deck of the boat. Quick as possible they grab the spinnaker pole and complete the gybe. We trim the spinnaker and off we go!

So much happened in those few days of the regatta. Can’t get to all the stories but one last one. We are ashore after the last race at the hotel bar. One of my friends from a different boat shows up and starts buying drinks! Great fun being had by all. Just after it gets dark he pulls me aside and asks if I can come help him. So, it appears his dad gave him money to go buy lobsters for their crew dinner they are having at their cabana that night. That’s what we’ve been drinking on for the last few hours. I am to be the lookout. He is going “diving” for lobsters…in the hotel restaurant’s lobster pen! Comes out of the water down the beach with a bag of lobsters. All’s well that ends well.

These were just some quick stories of some really great times. Things have changed and those times will never return. Great boats, great friends and great sailing. Maybe I’ll give some more stories later.