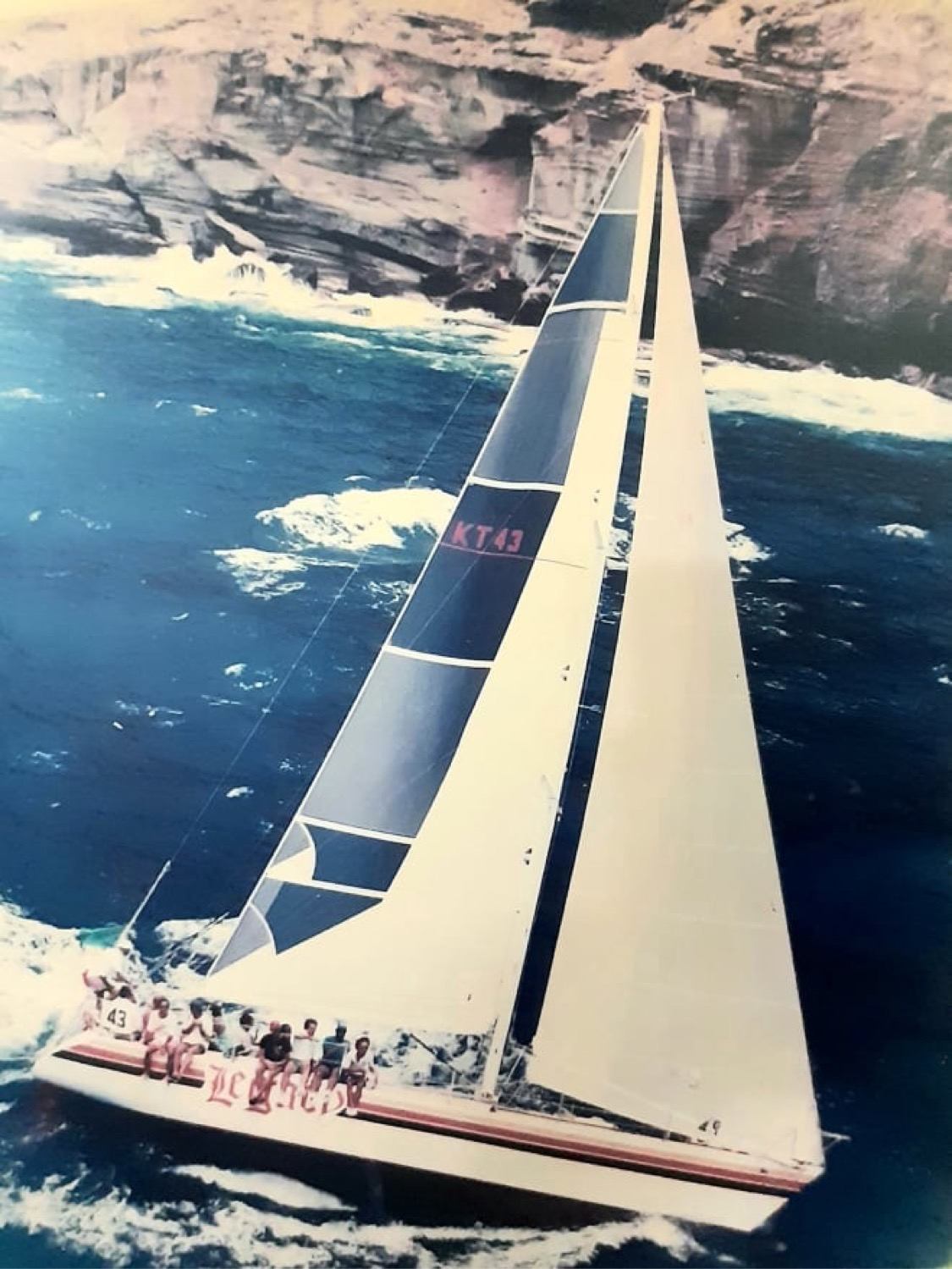 It’s 1984 and this was to be my first Antigua Race Week. We have arrived in Antigua with the brand new, out of the box, Soverel 42 named Legacy. The boat was launched in Trinidad about a month before. A small outing in Grenada using the delivery sails and now here we are at our first real regatta. What could possibly go wrong?

On arrival in Antigua some of us crew had to find accommodations ashore. We asked the first guy we saw, who happened to be a taxi driver, and away we went. Close by, cheap and good. You can only pick 2. Welcome to the Corner Hotel. Close by and cheap. Turned out to be good too. Sailors don’t need much at a regatta. Only hotel I’ve ever been to that had “room service” for ganja. Every day there was a knock at the door and a guy with a little silver platter with rolled goods. What a welcome! 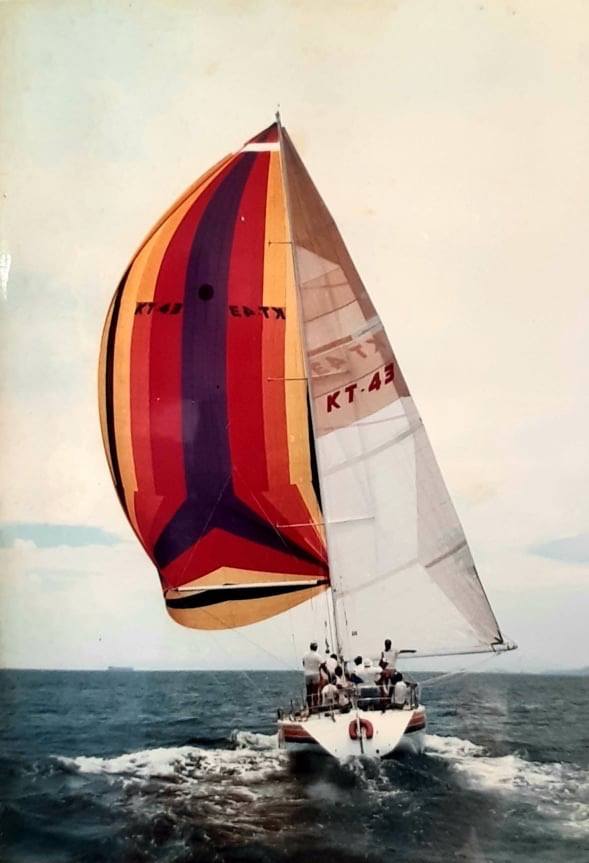 We had never seen our new sails as they were delivered late and met us in Antigua. They were all Mylar and Kevlar. We had never seen anything other than Dacron sails to this point. The main and #3 Jib were Kevlar, brown and stiff like heavy cardboard. The #1 Genoa was a Mylar laminate. All very high tech for the time and especially for us island boys.

The practice day went as good as could be expected. The breeze was reasonable and the sails fit We got the spinnakers up and down without incident. Figured out dip pole gybing and generally started to get a feel for things. This was the first time for many of us on a flat out race boat and not a cruiser/racer.

Lots to learn. For example, the jib lead cars could be adjusted under load! Progress reached the Caribbean. We had the sail maker aboard and that was it. No other professionals in those days. Just club sailors working things out as we went along. We had a good practice day so figured that we would just let the new boat loose and clean up the competition.

First race day and up with the #1 Genoa. Used it for the first upwind leg then it never came out of the bag again. The wind had arrived and was to get stronger every day. Started out at about 15 kts on the first day. And by the last day we were sailing in 25 kts solid with gusts in the 30’s.

Our sail inventory was Kevlar Mainsail, Heavy #1 Genoa, #3 Kevlar Jib and #4 Dacron delivery jib. 3/4oz Runner, 1.5oz Runner and 1.5oz Reacher. On the first 2 days we were under powered most of the time as we didn’t have a #2 Genoa to suit the conditions.

This wasn’t optimal but turned out OK as we were on a steep learning curve with the boat. Now we were finding out what this boat was all about. We started to experience rope slippage in the newfangled rope clutches. The spinnaker halyards would slip in the big puffs. No problem. Leave them on the winches and then quick install some horn cleats in the pit after the race.

First 2 race days were good days learning the crew work and fixing minor gear problems. Having moments of boat speed and tactical brilliance followed by gear and crew work failure. Not bad, par for the course with learning a new boat.

Can’t say much here. But as a newbie to Antigua Race Week in the 80s, it was special! Nothing like the generic lay days of nowadays. Lots of rum, nudity and wildness. What a time to be a sailor in your 20s. Needless to say from morning “room service” to night’s end, a great time was had by all!

While we were entertaining ourselves on our day off, the wind was building its strength. Nothing like wind in the mid 20s and up to clear cobwebs and hangovers. Upwind start, then a long downwind to the bottom of the island. Followed by a long upwind with a short run down to the finish on the other side of the island.

Got upwind OK then spinnaker up and took off downwind. First time in this much breeze under spinnaker. Now to realize the boat had no “feel” downwind. Despite a really good driver we had some good broaches, especially when gybing. In hindsight, we now know that the rudder was designed for a tiller like the original boat. Now with a wheel it was too balanced.

Managed to get back upwind only losing one halyard when the cover stripped off at the clutch. Steering was getting more erratic and on finishing, we realized that the quadrant had sheared off the fasteners holding it to the rudder post. Some of us spent the afternoon into night making repairs. No cordless drill so hand drilling stainless steel to tap and re fasten the quadrant.

After finishing the repairs, drying spinnakers below and cleaning up the boat there was no possibility of getting ashore. So had some rums for dinner then sleep in the sails. Next day was the Olympic Triangle race or Ocean Triangle where the marks were set to the west of the island. To get away from the lee of the island.

All that I remember of this race was chaos. Big wind and waves and short legs. Crew work at a premium. More breakages, wipe outs and antics. But the rudder repair held up. Actually don’t think anything else was ever done to it. That repair was never a problem again. Was really glad when that race was finished!

One broach in particular while gybing was really bad. We almost lost all 4 sheets and guys. Luckily one person saw what was coming and grabbed the end of the nearest sheet and dived through the main hatch down below. He managed to get a turn around the steps and that’s all that saved us from having a really large flag with ropes on the ends!.

This was a reverse course from Race 3. Got a terrible start, then around the top mark nearly last, spinnaker up and off downwind. Squall building that topped out with a gust to 40 kts! Sailing by the lee in the height of the squall. Sandy Island and reefs to windward, carnage and destruction all around as boats attempt to gybe. Afterguard discussions as to if we broach to windward we lose the boat but if we broach to leeward we should only lose the rig.

This is exactly when the spinnaker blew out. First time I’ve ever seen an owner grateful for a blown out new spinnaker. Gybed, got the sail aboard, gybed back and set the Reacher and into the leeward mark. Managed to make up major distance on the fleet. Now for a long beat up to the weather mark.

That last upwind leg was the highlight of the regatta for us. The boat is an absolute beast upwind in big breeze! We sailed up that leg and passed our whole class by the time we got to the windward mark. Didn’t save our time because of earlier mishaps but it felt great! Don’t mind that we finished that race with both halyards stripped at the clutches. They were being held up by other lines with rolling hitches.

During the last gybe to the finish, the boom turned into an “S” shape. It was a newfangled boom with lightening holes cut into it for weight saving. Couldn’t handle the loads. We got it jury rigged to get us home but the boat had a regular boom after that.

What a regatta! Never has a boat had a harder shakedown. It survived as did the crew and we learned a lot. Lots of upgrades to handle the loads. And lots of practice for the crew to come. We would be back! And on the podium in future years.